“Watch out, this man is dangerous! His name is Suckafish P Jones, he was born in Australia (at least his accent points in that direction) and currently lives a life of sonic crime in Barcelona, perverting all electronic music conventions to create a mad hybrid sound that fuses half of the world’s music into what he calls border-crossing heavy-step rhythms around anthems of lashingly ironically abstract lyricism. The truth is his music, and consequently his live act, aren’t lyrical at all… they’re heavy, crazy (bordering on mental) and just plain fun!”

Phantasmatica is the new EP by Suckafish P Jones, released October 21, 2009 by Barcelona’s Disboot Label.
‘Phantasmatica’ builds on the grimy energy of the first Suckafish EP, ‘Mr Cloak and Dagger’. With four brand-new tracks of rumbling bass and primitive drums, Suckafish continues to pervert the boundaries of contemporary club music.

Recorded and developed while touring Japan, Europe and Central America, ‘Phantasmatica’ screws, chops and bumps its way through a swampland of sub soundscapes and sweaty rhythms. This is mutant music for a dancehall at the end of the world – urgent, sexy and a little bit scary.

The EP’s first track, ‘Cloak and Dagger Empire’, takes the irresistible wind of South American Cumbia as its departure point. From the stomping, pressurized verse to hectic crescendos of the chorus, the song summons your bones to wind uncontrollably to its hypnotic shakers and primal pulse.

‘Yoyogi’, the EP’s second track, is a post-dubstep saunter through spooky melodies and spiraling bass lines. Screwing together a diverse palette of sounds recorded in Tokyo’s Nakano and Harajuku districts, ‘Yoyogi’ leaves the listener blissfully lost in a digital jungle of sounds and subsonic pressure.

‘Clap Clap’ is Phantasmatica’s fiery vocal offering. Suckafish’s smoky voice is punctuated by a primally addictive beat of alternately pensive and hyperactive rhythmic breakdowns. With its rapid fire distorted kicks and loping synthesizers, ‘Clap Clap’ is an anthem for Suckafish’s own brand of ‘Stagger Music’. 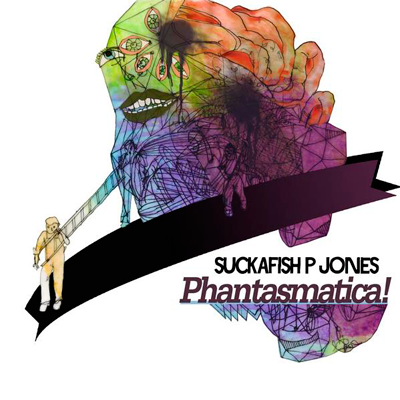